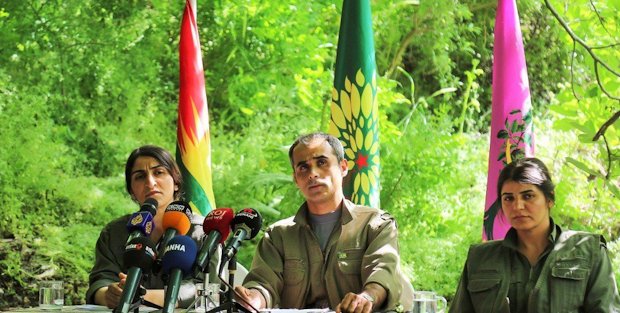 The joint statement on behalf of the parties was read by KODAR Co-president Fuad Bêrîtan who stressed that the conservatives and reformists turned a deaf ear to the demands of the society and fought for power.

The statement said the following:

“The 12th Presidential and city and village assembly elections have led to various debates in Iran as Iran, the region and the world are going through a very critical period. The elections and results could result in a major change in Iran and in the policies of foreign countries toward Iran. In connection with this, the election results will also have a major affect on internal dynamics and social circles.

Following a declaration we released on March 31, in which we put emphasis on the importance of democratization for Iran and the region, we announced a road map on April 23, highlighting a new perspective for the resolution of the existing problems in Iran. Another declaration we released on May 6 consisted of perspectives for a solution in line with the demands of internal dynamics, society and social circles, through which we sought to see if the people’s demand were respected and if importance was attached to their values.

However, it has been seen both in the debates and propaganda process of the candidates during this period that no political circle has any project to answer the needs and expectations of the society. Both sides are virtually turning around themselves in a circle. The populist discourse of the conservatives has a long history and it reached the peak with the election of Mahmoud Ahmadinejad president in 2005. On the other hand, the fact that the line of the reformists answers nor respects no demands of the society was clearly seen in the 11th presidential election of 2013. The society’s demand to govern themselves, have a voice and attain a new future was shown no respect.

The problems being covered up and ignored has formed a basis for the emergence of new problems in Iran. Through populism, creation of political crowdedness and accusation of one another, it is intended to distract society’s perception to various directions and render the people unable to discuss their own problems. The biggest problem is the Iranian constitution that bases on centralism, gathers all the authorities in one hand and doesn’t allow the society to govern themselves. The obstruction of women’s participation in decision mechanisms and connivance of their problems reveals the fact that they have been pushed aside of the society, as result of which their reality is ignored. Even this case itself is enough to see how much respect is shown to the people, democracy, peace and society. This is a system that focuses its endeavour on obstructing women, who make up half of the society, in terms of their clothing, biological and political participation.

This system gathers all authorities -in social, political, economic and cultural and other aspects- in one hand, accepts no critical attitude, portrays itself as taintless and the best, tries to discipline the society through economy, and seeks to create a distracted society that renounces all rights and gives thought to only economic rent. This is also en effort to ruin the basis of social economy.

Attachment of this much importance to military and informative security is aimed to keep the society under a constant control and create a modern tyranny.

Lack of a candidate elected by the people to represent them and come up with solutions to their problems, and the presence of candidates that will deceive the society, create bigger problems by using their problems and make the people dependent on the centralist system lays this truth bare. The goal is to look democratic to outside and make an appearance inside the country. This turns the election in Iran into a complicated game, the leading role of which is played by the government and false opposition.

For this reason, a large territory housing non-Persians in Iran has been turned into an area where only the Persians make an appearance and get elected, which paves the way for the seizure of power by the persons that ignore the society’s will, gather all the authorities in one hand and think of only themselves on an opportunist and self-interested basis. Each one of these persons became a tyranniser of the Iranian regime that is after power. The government, the gaps in Iranian laws and illegally formed institutions do never allow the development of local institutions. It is the people’s choice to vote in the city and village council elections in the event that honest persons approved by the people run as candidates. This would not mean that the regime is legitimate. This is a decision and right of the peoples in local administrations.

The political figures at the top of the Iranian system are playing a trick on the society’s historical and political memory by pretending to be opposition.

The dirty bargains made by the conservatives and reformists over the society must definitely be doomed. In the current situation, we as KODAR; PJAK, KJAR and KCR doom and boycott participation in the Iranian Presidential elections as a historic duty.”

KODAR: If the democratic developments does not in the Iran’s upcoming election, there will a major disaster

It is a critical stage in the Middle East, one that is facing an unprecedented crises: the Iranian presidency, city council's and the council of state are all up for…

KODAR started the Congress with an in-depth analysis of the Middle East and the role of Iran in the chaos that has engulfed the region. The analysis included the…

Foad Beritan a member of the Leadership Council KODAR

PART 1   It is clear that political life and doing politics in the Middle East today is not possible as same as before. Changes imposed on anyone. It is…

The KODAR leadership council: We are Demanding a Democratic-Nation instead of a Nation-State

Why is the democratic-nation preferable to the nation-state? What is the meaning of Democratic-Nation? How seriously have the problems of different nations been worked out in Iran? What is…