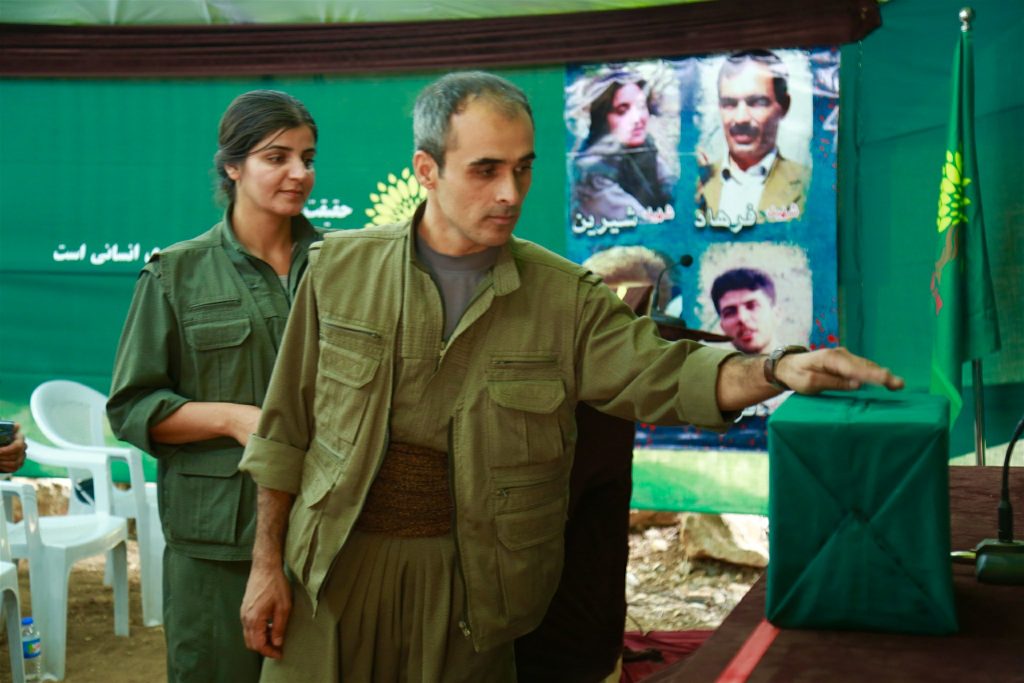 1- As we know a few days ago in Media Region (Qandil Mountains) the second congress was held by Democratic and Free Society of East Kurdistan ( KODAR ), what was the major changes or deference between the first and second congress ?

In fact, the answer can be from two perspective, first the paradigm that KODAR was established on it have clearly proven in Rojava ( West Kurdistan ) and it has a credits that can be relay on for answering of many political and social questions that people have for there way of life to be democratic and injustice. Next to this, the political situation in Iran as well as in the region was undergoing changes, every single one of these changes on the political equation in Iran and East Kurdistan has been impressive. In the second congress all these topics, including the opportunities and dangers of seriously discussed. In its entirety it can be said that there is a line with its goals, based on experienced in the past two years KODAR made a step forward and a new chapter for democratic campaigns of their realization and comprehensive model of democratic confederacies has prepared.

2- Is their any changes towards Government of Iran from KODAR's perspective or your previous position still to be considered ?

Fundamental Principe of KODAR toward Government of Iran is this, if government recognize democratic right and be willing to change the constitution, KODAR will work with them to make society democratic and free otherwise we will attempt to make it by our own. So this how the KODAR interaction with the issue, KODAR is a democratic system that will not accept Nation Regime, KODAR is community based organizing and will expansion democracy, although we prefer solving the Kurdish issue in democratic way but if Iran Regime choice the other way then the situation will be another condition in which KODAR are well prepared for resistance and defense.

3- You have declared in congress that if Iran Regime approaches to the issue of rights of people changed, you can make dialogue with them, although they are not accepting any opposition groups, do you believe the regime will chose democratic way to solve the Kurdish issue and internal problems ?

Recognizing the right of people and democratization of Iran will increase the power of Iran in the region and around the globe, the opposed will be true and making Iran weak. On the other hand when Regime talks to there ideological enemy why not talking to democratic element of Iranian society ?! Kurds are every day gaining more and more power and attention around the globe and in designing the new middle east, So aligning with Kurds would be much beneficial to the Regional government and they should not be eliminated. Being enemy of Kurds is not in the interest of anybody and will open the door for more problems in the region.

4- well, another corner of this topic is about being KODAR as an umbrella for Kurdish Party's and politicians, would you think that they will join the way that you are trying to make it and have an alliance of Kurdish movements under the KODAR agenda ?

creating an inclusive democratic front in east Kurdistan and Iran is a historical necessity. Divergence of those political party's and forces is serious threat to democratization in Iran. all of democratic forces and voices should come together to make the changes faster. in addition to the eastern Kurdistan parties, we consider our further interaction and convergence with the republican and democratic parties of Iranian Azeri, Arab, Turkmen and Baloch , transformation as well as other progressive forces. A historical and strategic goal is a necessity in this regards, we as KODAR prepared to their responsibilities in this field we operate.

5- Currently in west Kurdistan, talking about Federation and there was some progress toward that and at the same time the Syrian democratic forces are in bottle to liberate RAQQAH, what is similarity between you as a KODAR and that region in North Syria or West Kurdistan ?

A model in which there is a West Kurdistan, practically on the realization of one what we want for East Kurdistan, what is happing there is self determination and self governing all political varieties and recognizing religious minority and ethnicity of all area that they hold. Besides this , the equality of women and men at all levels of social, political, military and administrative realized. West Kurdistan is the most progressive social contract that is currently in the Middle East and there are practical mechanisms and monitoring systems are created. The democratic paradigm in West Kurdistan at the same time has huge ability to protect itself and its manifestation we saw in the epic of Kubani. The situation in the region is practically a side issue that goes to the issue of remedy in Iran will be inevitable. Resistance and refusal to resolve the issue of the Iran regime only increases the cost and time to make a little procrastination. Kurds are a major regional actor, regardless of the will and the whishes of their democratic and human demand there will not be easily practical project in the middle east.

6- In the past a few days people of East Kurdistan tried that set up a rally in support of HDP ( peoples democratic party ), in some city's like Kermanshah and Tehran supporters came to the street and shows there concerns But in many city's Iranian Regime militarized the area which was to be supporting the HDP and preventing to make rally by there security forces, this approach from Iran Regime how will be evaluated by you ?

This is should be answered by Iranian Regime, why demonstration against Turkish Fishiest Government should be deemed to be a threat to Iran Regime ? Creating the barrier to civic protests unacceptable to the Kurdish People, politically the Turkish regime and Iran regime are virtually two opposing and neutralizing each other and the sample is an approach to the Syria and Iraq issues. Iran regime should not think that Kurds are a threat to there national unity, any action in order to support Turkish regime is not helping Iranian issues with Kurds to be solved rather make it more difficult and they should not send a wrong signal to Kurds. if Iran regime is indeed are not allay of Turkish regime , why they are preventing the peaceful demonstration?

7- As the last question, the Iranian parliament recently in the discussion of the formation of the Azeri fractions, what would be KODAR's approach regarding the creation of such fraction and to what extent these fraction can be useful ?

In our opinion, constitute a fraction of Azeri or Kurds, Arabs in the event that aims to play a democratic role can be considered useful. Otherwise, only making a name is not enough and will not seek achievement. The basic issue is to what extent these fraction will be able to make a move in direction that fundamental and human right in Iran can be and will be achieved and terminate the violations of those rights.

Siamand Moeini: Political and democratic campaigns of PJAK has been neglected / Interview

Siamand Moeini a Council Member of the Free Life Party of Kurdistan (PJAK) in an interview with Akhbare Rooz News Agency: The political, social and democratic struggle of PJAK has…

Shahram Ahmadi was executed with more than 20 young political prisoners in Gohardasht (Rajai-Shahr) Prison in Karaj, north-west of Tehran. During an interview before his execution, Shahram Ahmadi said: "Judge…

In the last few decades along political plans against the Kurdish nation, the Iranian regime has started to build dams to generalize urbanity and ruining village population system. Because of…

Along with establishing a new system in Iran and solution of issues of nations and advancing Democratic Confederation system, an interview has been released in the Persian section of Firat…