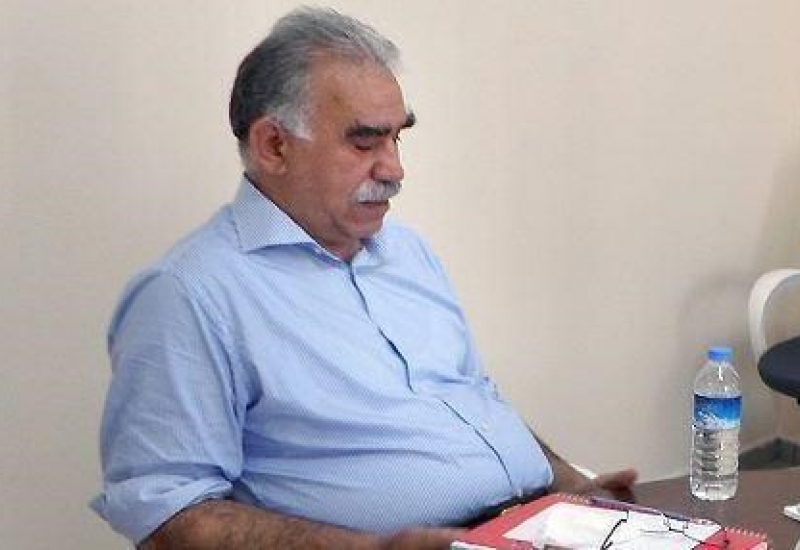 ‘I am a Democrat and Revolutionary’: Important Messages from Abdullah Ocalan

Mehmet Öcalan met the PKK leader on 11 September 2016 after an 18 month isolation and ban on communications imposed by the Turkish government.

Mehmet Öcalan said the Kurdish leader did not want to meet him when he was finally allowed access to Imrali. According to brother Öcalan, it had normally taken the PKK leader 5 minutes to come to previous meetings over the past 18 years, but took him 30-40 minutes this time, and only after he was convinced by prison administrators.

Öcalan said his brother was furious at recent developments, adding: "I already guessed that he did not want to come out for the visit. The prison administrators went to talk to him and managed to convince him in 30-40 minutes. He wouldn't have met me otherwise. His first words on seeing me were: 'Okay, you came here but my words will be too heavy for you to carry. You could hurt both yourself and me. This is because I will tell you the truth. I wouldn't have come here if I were in your place.' When I told him that I had gone there because the people demanded it, he said he knew and understood that."

"I am a democrat and a revolutionary."

Mehmet Öcalan quoted the Kurdish leader as saying: "I am a democrat and revolutionary. I will not surrender to the state or anyone else even if I have to stay here for dozens more years. I can continue living like this till the end of my life without breathing a single sigh. I am clear on this subject."

Mehmet Öcalan said his brother was very agitated and spoke with anger for 50 minutes, and all his comments were about the Kurdish movement and the state but not individuals. Abdullah Öcalan said: "Both the state and our movement are coming here (to meet me) when they are in a deadlock. This is not acceptable."

Mehmet Öcalan said this was the first time he had seen his brother so angry and outraged during their meetings on the island for the past 15 years.

Mehmet Öcalan quoted the Kurdish leader as saying the following regarding the coup attempt of 15 July: "I have repeatedly warned against the probability of such coups as long as the Kurdish question remains unresolved. The way to coups and such attempts will always remain open unless the Kurdish question is resolved and a democratic Turkey is built. Such coups and attempts will be staged by various persons if this void is not filled. The current environment in Turkey is always convenient for coups, and I told the state officials about this reality many of times. It makes no difference who will stage these coups, and these may vary but the main thing is that the coup mechanism will always be in effect."

According to his brother, Öcalan's messages focused on Kurdish institutions and structures rather than individual names. Öcalan's remarks about the destruction of Kurdish cities and towns during the 'self-rule resistance' by the people was as follows:

"Why couldn't you save Mehmet Tunç?"

"Abdullah Öcalan described self-rule as a reality, made comprehensive evaluations and voiced criticism. He is following the developments in Kurdistan, Turkey and the Middle East better than all of us. He monitors and assesses both the process and the agenda better than us despite restricted means. He knows very well who has done what. He asked 'Why couldn't you save Mehmet Tunç when he said that they had been encircled, blockaded and were running out of time?"

The PKK leader also commented on the Rojava Revolution: "We had neither arms nor money when me and a few friends went to Rojava [in 1979]. We had no other support. We had nothing, but we managed huge things under the rule of Hafez Assad who was an influential name in the Middle East then. We introduced the Kurds to the world in Rojava. As part of the Rojava Revolution, the US and PYD exchanged support against ISIS until quite recently. However, the US invited the Turkish state to Rojava through Jarablus a few weeks ago. This must be analysed very well. I guess the US pursued such a strategy to weaken both the Kurds and Turks at this point. Turks wouldn't have been able to enter Jarablus if the US hadn't wanted so. Their goal is to make both parties confront each other here. We formed the basis of today's movement in Rojava when we went there without arms and money. We managed this by advancing step by step. The gains attained in Rojava today are the outcome of the project we unearthed there years ago. Rojava has an armed force of 50 thousand fighters today. If it will not be able to save itself now, when else can it do that? What can I do at this point?"

"Municipalities not integrated with the people."

Mehmet Öcalan said the Kurdish leader also shared his views regarding the ending of the Kurdish question resolution process. "The [Turkish] state ended the process after the agreement reached in Dolmabahçe on 28 February 2015. It was not us but the state, which is now ruled by Erdoğan and his AKP, to knock over the negotiation table. During our last meeting [in April 2015], the state delegation told me that they would come back to the island and talk to me within 15 days after the agreement announced in Dolmabahçe. However, they knocked over the table afterwards. I waited for them but they did not come. We had no fault during the resolution process and we were ready to do anything required. If the state had agreed on keeping the process going, we would have fulfilled all our responsibilities one by one."

According to Mehmet Öcalan, the Kurdish leader also said he and the other 3 inmates in Imrali Prison were talking and exchanging views regarding resolution and were working on a project to this end at the moment. "If the state is ready, it can send two people to the island and we can start negotiations. We are ready for that. Apart from that, anyone can do whatever they want. I am not afraid of the state. They can execute me here but never take possession of my will," Abdullah Öcalan said.