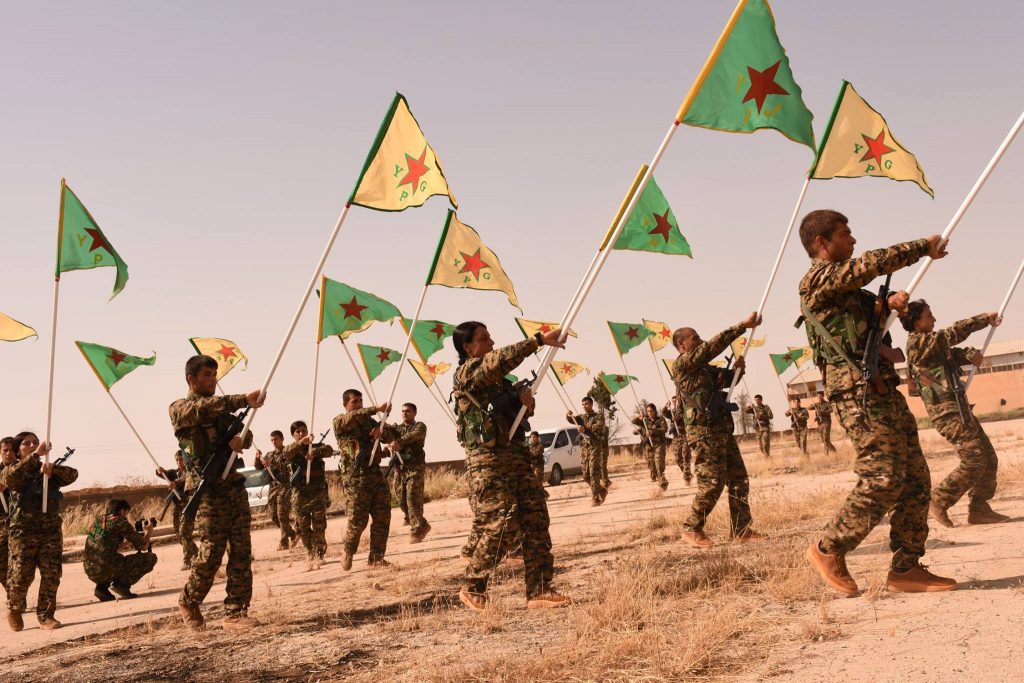 In Defence of Rojava

Turkey backed FSA militants, made up of Nour al-Din al-Zenki Battalions, Faylaq al-Sham (Sham Legion), Sultan Murad Brigade and Jabhat Fateh al-Sham (formerly al-Nusra) among others -all Salafist/Islamist groups responsible for countless human rights crimes- have already declared they will march onto Manbij, which had rejoiced with joy recently after being liberated from Islamic State by Kurdish-led Syrian Democratic Forces (SDF). Images of women taking off their enforced niqabs and smoking, and men shaving off their beards is still fresh in the memory of those following events in Syria.

After taking Jarablus in agreement with the Islamic State without firing a single bullet, the Turkish army has engaged in airstrikes and shelling of civilian areas, killing at least 45 in two villages south of Jarablus. Dozens of local fighters from the Jarablus Military Council, affiliated with the SDF, have been taken prisoner and tortured in front of cameras; most of them Arabs.

With its latest military foray Turkey, which has tried to camouflage its regional war on Kurds by using the Islamic State as a pretext, is trying to prevent the conjoining of Rojava’s three cantons. Furthermore this is also an attempt to strengthen Sunni/Muslim Brotherhood forces, which are ideologically aligned with the Turkish AKP government. Through these proxies Erdogan hopes to revive his neo-Ottoman aspirations to have a say in Syria’s future and a longer-term influence in the Middle East and North Africa.

What is at stake though, as much as Kurds’ gains, is the possibility of a progressive, secular and democratic political line and system in the region. This is what Rojava represents and this is why the Syrian regime, Iran, Russia and the USA have agreed to Turkey’s invasion. Rojava’s existence in this regard is a threat to the status quo and interests of all the nation-states and governments in the Middle East and by extension those pillaging the region. As an alternative model of governance Rojava has proven that people from different ethnicities and religious groups can organise at the local level, live, produce and struggle together without a centralised state, even during times of sectarian war. The unity between Kurdish, Arab and Turkmens against Turkey’s invasion is proof of this.

For this reason Rojava’s expansion and the conjoining of the three cantons -Cezire, Kobane and Afrin- is being prevented by all powers involved in the Syrian war. Furthermore and for the same reason, Rojava’s expansion cannot be viewed in the same light as areas being captured by Turkey backed jihadi groups or the regime. These two political systems -Islamist and Baathist- have nothing to give to the people in terms of a humane, progressive and participatory democracy. Indeed they do not even make any such claims.

Although Rojava, with its anti-nationalist rhetoric has already nullified accusations from some quarters that Kurds are trying to capture Arab lands it is also worth noting that the area between Kobanê and Afrin, which is under attack by Turkey and FSA jihadists, was systematically Arabized by the Syrian regime in the 1970s. Even if this were not the case, the Kurds, as a distinct group living in a contiguous piece of land across Turkey, Iran, Iraq and Syria, would still have a right to self-determination and international recognition. To argue otherwise would mean that the states above, which have large Kurdish populations whose rights have been denied for decades, should be deemed illegitimate from the moment they were declared.

In short, Rojava has become a light, a beacon of hope for all the progressive people of the world; against inequality, despotic regimes and systems of hierarchy and patriarchy, Rojava has raised the flag for humanity against barbarism. This is why the Rojava Revolution must be defended against Turkish and jihadi aggression once again. Once again revolutionaries, democrats, feminists, secularists and all progressive forces must come together, like they did in Kobanê, to make the Rojava Revolution victorious again.

After thorough investigation in the region of ( Salas Bawejany ) Province of Kermanshah, East Kurdistan we acknowledge that the local traitors were involved actively in this massacre and…

The way to stop the Islamic State is a united, free Kurdistan – just what the US does not want

This article was written 2 years ago at the time that ISIS terrorist was at the peak of there power, it is still worth reading it! August 17, 2014 Written by John…

He is waiting a trial and need your help !

He is waiting a trial But, please find him a 1-Judge 2-Lawyer 3-Attorney General . The Crime is Genocide against his Nation including him, the location of Crime is Sinjar…

Disclaimer: The views and opinions expressed in this article are those of the  author(s) and do not necessarily reflect the position of www.kodar.info Shortly after WWII a Europe-wide network…