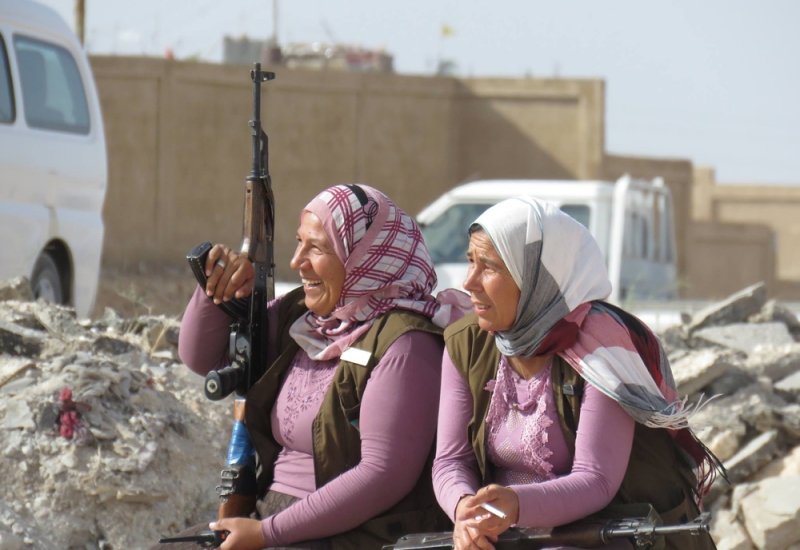 A Love Letter to Jarablus

Even worse, though not surprising, is the widely held belief that Barzani endorsed the invasion after a meeting between him and Erdogan yesterday.

Betrayed, surrounded, suffocating amidst the stifling stench of treachery, the YPG-YPJ-SDF, weary from the recent liberation of Manbij and then the conflict with Assad in Hasakah, Rojava will remain indefatigable. The problem that Turkey, Assad, USA, Iran and cronies face is no longer the "Kurdish Question", which their fascist, imperialist, violently colonial Orientalist minds have always seen as the "Kurdish Problem"; What they face is the “Kurdish Alternative”, an ideology that saw thousands of these freedom fighters climb Mount Shengal to liberate the Yazidis and armies a thousand times better equipped then them, the ideology that was more powerful than any guns or bombs that ISIS and Turkey could throw at Kurds, and ultimately led to the liberation of Kobane; the same ideology which burns brighter than the Made-In-USA bombs that are fired by Turkish hands on Jerablus and its innocent civilians right now, and which will act as the guiding light that will lead the displaced to flow into Kobane, Cezire and Efrin.

The free, autonomous zones of liberty, humanity, and resistance continue to exist; they occur and occur and occur and persist and burn bright despite the closed borders, the secret meetings, the alliances made and broken. No longer can we even rely on the mountains, for even they cannot protect us against such wholesale treachery, just as we have never been able to rely on certain Kurds among ourselves. But the source of our liberation is already within our grasp. In young hands that hold weapons of liberation and freedom, and ideologies of inclusiveness and multiculturalism on the other. As the imperialist, bloodthirsty vampires of capitalism help each other destroy Syria and Rojava, bombing children into terror and trauma, we rebuild; we take in the hungry, the weary, the displaced and the dispossessed; we take in the very people who were responsible and in charge of our torture, rapes, massacres and oppressions in not so long ago yesterdays, and we place the warm cloth of inclusive democracy on their tired, hunched shoulders. And THIS is the greatest weapon, the greatest threat, the greatest explosive device of profound change and humanity that they are attempting to suffocate with their terrorist tactics in the pretence of destroying other terrorists that their terrorism birthed. But our weapon is far greater; the now fragile, old man -deemed so dangerous- who they forced to sit alone in a cell for 17 years on Imrali Island- who birthed an ideology and a revolution so profound that destroyed thousands of years of racism and sexism- so that weary Arab women can flee willingly into the safe liberating arms of Kurdish women. The ideology that drives Armenian, Assyrian, Arab, Christian, and others to join hands with the Kurds- willingly, organically, with the blood of their bodies that they place together at the frontlines- to form the alternative:

The legend of Rojava, of Kobane lives today; breathes; exists; forms and reformulates. Rojava will not be conferred to the past, will not be the Camelots, the Avalons, nor Homer's Ithaca of yesteryears because too many people have come to know its name; and too many are willing to die for it- not for the Utopia it could be in the distant, unforeseeable future, but the Utopia that it is today.

They don't even know what they are fighting with their war-producing, bomb-manufacturing based alliances: you can kill people, destroy buildings made out of the toughest, enforcing cement and metals, but you cannot destroy ideas and free minds.

Disclaimer: The views and opinions expressed in this article are those of the
author(s) and do not necessarily reflect the position of www.kodar.info
Related posts Share this post:
July 29, 2016

There were peace talks between the Turkish state and the Kurdish movement for three years. Yet, a war concept was initiated on 24 July 2015. What were the conditions and reasons…

Sakine, a life dedicated to Kurdistan and women’s freedom

Kawa and the story of Newroz

A long time ago in between the two great rivers Euphrates and Tigris there was a land called Mesopotamia. Above a small town and tucked into the side of the…